23 of 25 States with Highest Rates of Obesity are in the South and Midwest (Recipe: Sweet Potato, Black Bean, and Spinach Quesadilla)

You’re probably thinking, “I could have guessed that.”

The report is The State of Obesity: Better Policies for a Healthier America from the Trust for America’s Health (TFAH) and the Robert Wood Johnson Foundation (RWJF) (formerly known as the F as in Fat report series).

22 states have adult obesity rates of at least 30%.

45 states have adult obesity rates of at least 25%.

Arkansas has the highest rate of adult obesity at 35.9%.

Colorado has the lowest rate of adult obesity at 21.3%. (It’s interesting that the state with the lowest rates of obesity was also the first state to legalize recreational use of marijuana.)

North Carolina tied for 24th (with Alaska) in this year’s ranking.

Now, nationally, more than 30% of adults, nearly 17% of 2 to 19 year olds and more than 8% of children ages 2 to 5 are obese. Obesity puts some 78 million Americans at an increased risk for a range of health problems, including heart disease, diabetes and cancer.

American Indian/Alaska Natives have the highest adult obesity rate, 54%, of any racial or ethnic group.

Obesity rates are 26% higher among middle-age adults than among younger adults—rates rise from 30% of 20- to 39-year-olds to nearly 40% of 40- to 59-year-olds. People are getting heavier as they get older.

Prevention among children is key. It is easier and more effective to prevent overweight and obesity in children by helping every child maintain a healthy weight than it is to reverse trends later.

In case you’re interested in your state, based on an analysis of new state-by-state data from the CDC’s Behavioral Risk Factor Surveillance Survey, adult obesity rates by state from highest to lowest were:

People need to eat less and exercise more it seems!

So, I still have not posted all the awesome pictures from my trip to San Francisco and Yosemite! After A and I hiked to Sentinel Dome we continued to Taft Point which has an amazing view of El Capitan. This hike was one less traveled so there were no crying children or older/slower individuals. We ran into a dad and his daughter who offered to take pictures of us at one of the lookout points. We did the same for them. It was like a mini photo shoot! The day was just gorgeous for this hike! I recommend it! 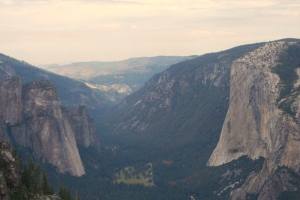 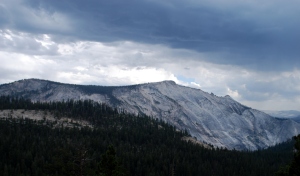 When we got to Taft Point, there were crazy people slacklining across the cliffs! Ummm…no thanks. I know they were attached but I have no desire. None at all.

So, those are all of my Yosemite pictures! I can’t wait to go back with A again! Hopefully, soon!

Quote of the Day:

“To keep the body in good health is a duty…otherwise we shall not be able to keep our mind strong and clear.” -Buddha

This combination of flavors was surprisingly good! I really enjoyed this dish! It also seems like a good way to celebrate the arrival of autumn. Yay! I’m so excited for autumn! Cool, crisp runs. Changing leaves. Pumpkin recipes. Get ready for some pumpkin recipes! I have a backlog of them from last year that I never made! 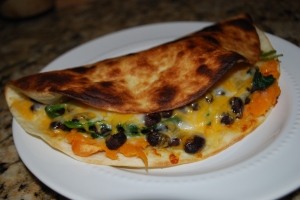 – Heat broiler. Line a large broiler-proof baking sheet with foil. Place the sweet potatoes on a plate, cut-side down, and microwave on high until tender, 5 to 7 minutes.

– Heat the oil and garlic in a large skillet over medium heat until the garlic just starts to sizzle. Stir in the cumin, cinnamon and cayenne, and cook for 30 seconds.

– Place the tortillas on a prepared baking sheet. Scoop the sweet potato from the skins and spread on one half of each tortilla. Top with the bean mixture and cheese, then fold over the tortillas to cover the filling (they will look overstuffed). Broil until the top is golden brown and the cheese has melted, about 2 minutes.

This entry was posted in Overall Health and News, Recipes. Bookmark the permalink.