You know my interest regarding school meals (I only spent my entire dissertation researching this area).  This report by Mission: Readiness on school meals and obesity in the military was extremely interesting.  I will reproduce snippets for you here.

While the Nation’s obesity epidemic makes daily headlines, its effect on the U.S. military has largely been unreported: a 61% rise in obesity since 2002 among active duty forces; more than $1.5 billion in annual obesity-related health care spending and costs to replace unfit personnel; significant recruiting challenges with nearly one in four young
adults too heavy to serve; and newly released data in this report showing overall ineligibility above 70% in most states.

With this in mind, the more than 450 retired senior military leaders who comprise Mission: Readiness are marking the start of the third school year in which millions of students are now eating healthier school meals with more whole grains, fruits, vegetables and lean proteins. This is also the first year in which candy and many other high-calorie, low-nutrient snacks and beverages in vending machines and elsewhere are being replaced with healthier snacks and drinks.

These changes are important victories in the battle against obesity. America’s youth spend considerable time at school, and many young people consume up to half of their daily calories there. If we are to win, schools must be our allies.  According to the U.S. Department of Agriculture (USDA), more than 90% of the country’s school districts are successfully meeting the healthier meal standards. Recent surveys indicate widespread student acceptance of healthier lunches across all grade levels. Furthermore, 72% of parents nationwide favor updated nutrition standards for school meals and school snacks, while 91% favor requiring schools to serve fruits or vegetables with every meal.

Mostly due to excess calories and too little exercise, young adults today are on average 20 pounds heavier than in 1960.

Currently, 12% of active duty service members are obese based on height and weight—an increase of 61% since 2002—which is resulting in serious problems with injuries and dismissals. Given that one-third of American children and teens are now obese or overweight and nearly one-quarter of Americans ages 17 to 24 are too overweight to serve in our military, the obesity rate among active duty service members could get even worse in the future if we do not act.

Children’s biology has not changed in the course of a single generation. What has changed dramatically is our nutritional and exercise environment. Things that would have been considered absurd in the 1960s are now commonplace in American society, such as drinking sugary drinks daily instead of milk or water, or watching television and playing video games all afternoon instead of riding bikes and playing outside with friends.

Each year, thousands of recruits lose 20 pounds or more to join the military, and they are at a higher risk of gaining that weight back once they leave basic training.  According to one study, one out of every seven male Army recruits reported that they had not exercised or played any sports in a typical week prior to joining.

One study of more than 2,000 men in a U.S. Army light-infantry brigade in Afghanistan found that 14% were obese. Across the military, too many men and women are
not just overweight but actually obese. In 2002, less than 8% of active duty service members were obese, but by 2011 that figure had jumped to more than 12%—a 61% increase.

In 2013, the military launched a campaign called Operation Live Well to improve the health of our troops and their families. Chief among these efforts is the Healthy Base Initiative at 14 pilot sites across the country, aimed at promoting health among troops and their families by educating them about the dangers of a sedentary lifestyle and poor nutrition and creating environments that support healthy behavior. The initiative will allow the military to see which innovations are working at different bases and identify the ones that could be expanded service-wide. The Department of Defense is currently collecting and evaluating results from the first phase, which will be reported by August 2015.

Did I ever show you the pictures A and I got with Meb??  It was pretty awesome! 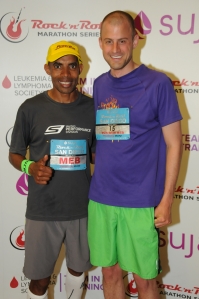 Quote of the Day:

“Now if you are going to win any battle you have to do one thing.  You have to make the mind run the body.  Never let the body tell the mind what to do.  The body will always give up.  It is always tired in the morning, noon, and night.  But the body is never tired if the mind is not tired.” -George Patton

So, this is one of my all time favorite desserts.  ALL TIME.  When I was in high school and college, my good friend Sara’s mom (the one who just got married!) would make this every time I came over to visit during the holidays.  It’s like crack for sweet tooth junkies.  I’m serious.  I had to take the rest of it into the office today so that I wouldn’t eat the whole thing.  It went in a flash!  And co-workers asked me for the recipe! 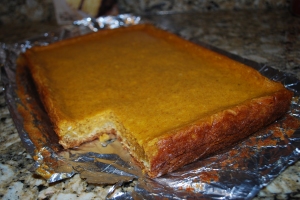 – Make cake mixture and pat the mixture into the bottom of a lightly greased 13×9 inch baking pan.

– In a large bowl, beat the cream cheese and pumpkin until smooth.  Add eggs, vanilla and butter.  Beat together.

– Spread the pumpkin mixture over the cake batter and bake for 40 to 50 minutes.  The center should be a little gooey when you take it out of the oven.

This entry was posted in Overall Health and News, Recipes. Bookmark the permalink.