Why All Runners Should Indulge in Carbs (Recipe: Ultimate Fudgy Brownies)

The following was adapted from a May 2014 article by Nancy Clark on Active.com.

The definition of the “enemy” (carbohydrate) varies from runner to runner. For some runners, carbs mean bagels, bread, and pasta. For others, carbs mean any food made with white flour and sugar. For others (including me), carbs include grains, fruits, vegetables and all forms of sugars and starches.

All of these types of carbs digest into glucose, feed the brain, and get stored as glycogen in the muscles. If you eat too few carbs, your muscles will feel needlessly fatigued.

Some popular diet books (including The Paleo Diet, Grain Brain, and Wheat Belly) have convinced many runners to avoid carbohydrate-rich foods. The authors paint the picture that carbs are inflammatory, fattening, and bad for you. Their hype fails to clearly explain that the anti-carb message is not appropriate for athletes who are lean, fit & healthy.

The “carbs-are-bad” messages are targeted to the masses of overweight, sedentary people who consume excessive amounts of calories, often from sweets and treats. For those unfit (often unhealthy) people, excess carbohydrate can contribute to elevated blood glucose, which triggers the body to secrete extra insulin.

Consistently high insulin can be inflammatory and lead to nasty health problems. Yet, well-trained runners can handle carbs with far less insulin than the average American—and without carbs causing “sugar crashes” or weight gain.

For runners who routinely train hard 4 to 6 days a week, carbs enhance performance and should be the foundation of each meal. The International Olympic Committee’s research-based recommendations for an optimal sports diet include far more carbs than you may realize:

So what does this recommendation look like in terms of food? For a 150 pound runner who trains hard for an hour a day and remains somewhat active the rest of the day (that is, does more than just sit in front of a computer for 8 hours), this comes to 375 to 450 grams of carbohydrate per day, the equivalent of 1,500 to 1,800 calories of carbs. This is more than a few blueberries, a spinach salad, and a pile of broccoli.

It sounds crazy I know.  However, the difference is that these carbs aren’t coming from sweets and treats.  They are coming from fruits, vegetables, nuts, oatmeal, brown rice, pastas.

To put it a little more in perspective.  If you have sworn off bagels for breakfast, here’s what you need to put in your fruit smoothie to replace the 60 grams of carbohydrates in a 300-calorie Dunkin’ Donuts-size bagel:

That’s a lot of fruit.

If you’ve nixed your lunchtime sandwich and pretzels, here’s how many veggies you need in your salad to replace the 62 grams of carbs from two slices of wholesome bread (220 calories) and a 100-calorie bag of pretzels:

That’s a lot of vegetables.

Basically, wholesome grains have a helpful role in a sports diet. While fruits and veggies offer some carbs, you need to eat lots of them to compensate for lack of grains. Your efforts to eat healthfully might end up contributing to a sports diet that fails to support your hard training. Please, fuel wisely!

[Again, the above was adapted from a May 2014 article by Nancy Clark on Active.com.]

So, what else besides Italy and puppies has been going on in my life?

Well, A passed his ASA!  Hooray!!!  To celebrate he sent me these beautiful flowers: 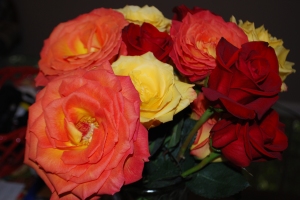 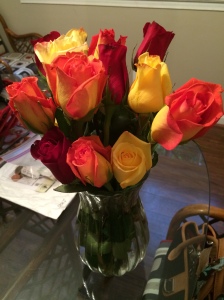 I know!  He sent me flowers for passing!  But don’t worry, I bought him a nice bottle of scotch to celebrate which I think he liked: 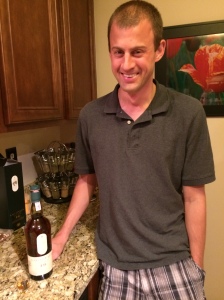 This all went down the weekend of September 20 which is almost two weeks ago!  Crazy!  That was also the weekend of Kelsey’s wedding that we attended in Hampton, VA.  I got be a part of a beautiful wedding to a beautiful couple as one of Kelsey’s bridesmaids.  They are a wonderful match for each other!  Here are some snapshots from the wedding (we took several obligatory wedding guest selfies): 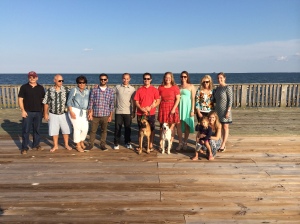 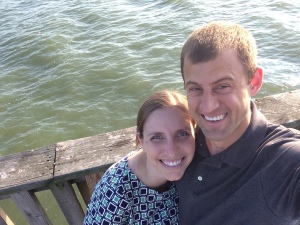 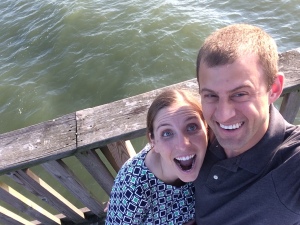 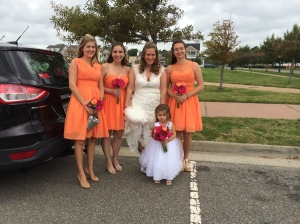 Then of course we had LRs to do on Sunday–I had 16 miles and A had 12 miles.  Followed by Dunkin’ Donuts as a snack (carbs! haha) and then we went to brunch at Another Broken Egg with K&T and S&B.  So very delicious.  He of course got his Bloody Mary.

Oh, and A’s marathon is THIS weekend!  I’m so extremely excited for him!  I know he says that this is probably going to be his only marathon, but we’ll see about that. 🙂  The endorphins you get at the finish make you crazy enough to do it all over again.

And I think that is a wonderful Quote of the Day:

Again, I think the blog post is too long for more Italy pictures, so they will come in the next post!

I made these Ultimate Fudgy Brownies kind of expecting something spectacular.  Definitely not spectacular.  Not even worth making a second time IMO.

1.  Adjust oven rack to middle position and preheat to 350°F. Place a 13- by 8-inch piece of parchment or foil in pan so that sides extend over two edges. Lightly grease sides of pan.

4.  Pour into pan and bake until just set, 28 to 30 minutes. Avoid overbaking for the fudgiest texture. Let cool completely in pan. Run knife along edge of pan and grab onto paper ends to carefully lift brownies out of the pan.

This entry was posted in Nutrition, Recipes. Bookmark the permalink.

2 Responses to Why All Runners Should Indulge in Carbs (Recipe: Ultimate Fudgy Brownies)