A 5K with the Bestie on my DE Trip! (Recipe: Pumpkin Scones with Spiced Glaze)

So, this weekend was pretty much amazing and much needed!  I traveled to Newark, Delaware to see some of my best friends!  For those of you who have been following my blog, Ellie flew to Boston to cheer me on during the marathon!  And I finally followed through on my promise to visit and see their amazing house!

The weekend was jam-packed, but that’s just how we like it! 😉

I got in late Friday evening having consumed a delicious Chic-Fil-A dinner (my absolute favorite fast food restaurant–I miss not having one in Madison!).

We started off the weekend bright and early Saturday morning by driving to Havre de Grace for a 5K.  (I totally did my hip exercises outside before the race!)  Ellie and I decided we would aim for 8:45 minute miles.  Her husband Matt was going for a sub-20 minute 5K.  We were ready to rock ‘n’ roll!

And I did take pictures during the race:

Matt’s race was a success winning 1st place in his age group!  They had a real “leader board” at this race!! 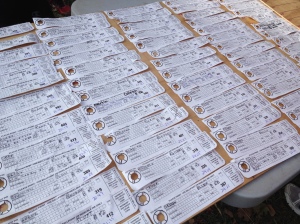 We had to celebrate by going to the Milburn Orchard to have cider donuts and apple pie milkshakes which were DELISH. 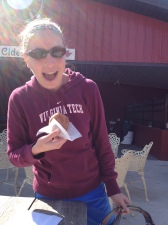 As soon as we got home, we made pumpkin scones to celebrate that autumn would be arriving the next day!!  My favorite season!

Next came the Virginia Tech football game which was a complete embarrassment.  Three overtimes??  Really??  Come on!  At least we pulled out a win in the end!  But our “tailgate” was reminiscent of the old days–Matt made his famous speedies, there was lots of yelling and Brady wore his VT bandanna.  (Brady is Ellie and Matt’s pup!) 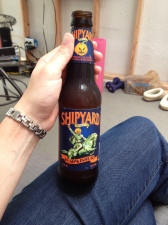 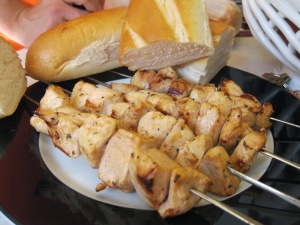 Ellie and I had to take a break during half time and most of the 3rd quarter and walk around University of Delaware’s campus.

Then almost as soon as the game was over we headed over to Oktoberfest!!  Brats, beer and pretzels galore!  It was a FANTASTIC people watching event!  Lots of music and dancing and singing and eating!  And I found if you flirt a little with the old men serving the alcohol, they tend to give you more than what they are supposed to. 😉 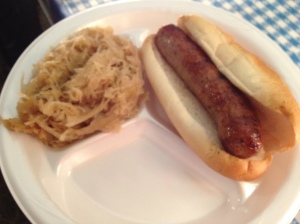 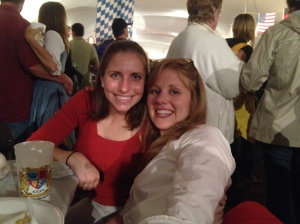 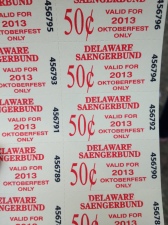 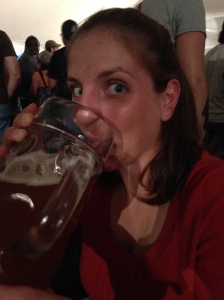 Of course we stopped at UDairy on the way home for ice-cream!  I have now had homemade ice-cream from the following ag schools:  Delaware, Wisconsin, Cornell and Clemson!  What the heck, VT??  Why don’t you have a creamery??

Ellie and I are early birds, so we woke up fairly early on Sunday to go on a short run and do a barre workout.  I hadn’t done a barre workout since last winter (whenever I last blogged about it), and was a tad sore on Monday.  It is definitely a good workout!

Then Ellie made brunch and we headed out to Longwood Gardens.  However, we had to stop at La Michoacana Homemade Ice Cream on the way as it is one of Matt’s top 3 ice-cream places ever.  They had to introduce me, of course!!  It was so good!  I had the chocolate fudge brownie, but I tasted the corn flavor (yes, corn!) and it was surprisingly really good! 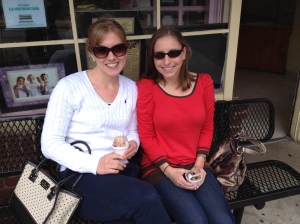 We finally made it to the gardens which were beautiful!  And it was such nice weather outside to be walking around.  I would love to go back and spend some more time there. 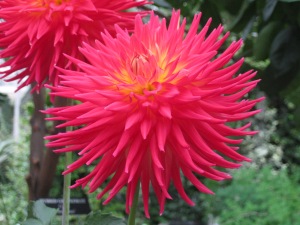 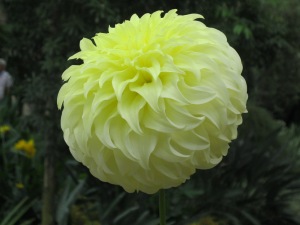 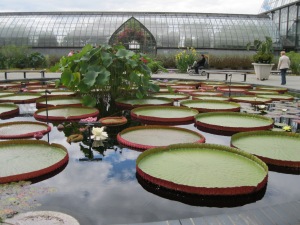 They even had a whispering bench!  If I whispered at one end, Ellie could hear me at the other!! 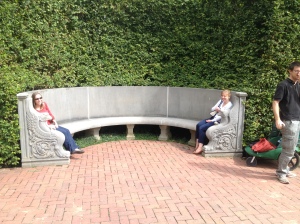 And they had an awesome tree house that would be any child’s dream!! 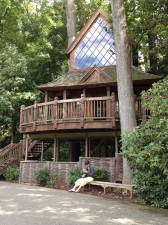 After that we headed to Wyebrook Farm!  My friend Becca from college works there (who also has an AWESOME blog!!), so we visited and had linner (lunch/dinner) at their cafe.  My pulled pork sandwich was to die for!  Sooo tasty!  Because, as I’m sure I’ve mentioned, I don’t eat beef.  But Matt and Ellie both agreed that the burger was super tasty!  And they even bought meat to take home with them!! 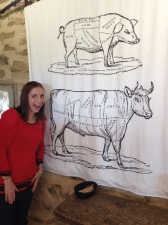 Then it was time to head to the airport!  =(  Thank goodness I get to see them in less than 2 weeks when we go to Blacksburg for the UNC football game (I know, I know, I’m a traveling fiend!)!

This weekend was just amazing–filled with laughter and talking and smiles galore!  I couldn’t have asked for more!  I am just so thankful that I got to spend a weekend with this great couple and one of my best friends!

And my pups were well taken care of and probably didn’t even miss me!!  Callie got to play in a Flyball tournament over the weekend and traveled with the Williams-Osting’s.  I know she had a blast!  And she got her next UFLI title:  Top Flight Executive II.  She came home and passed out–she hasn’t been that tired in awhile! 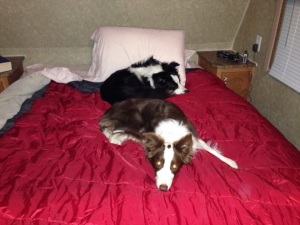 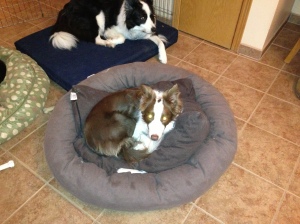 And Envy got to spend another weekend at the Miller’s!  She was entertained constantly!  She watched the Packers game with Maille and Katryn, and Maille made an “Envy Pumpkin” that just made my heart melt!  I am also thankful for the wonderful friends I have who watch my pups when I’m away! 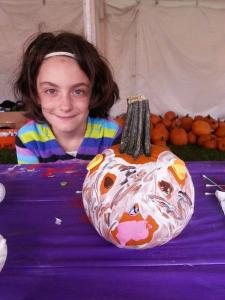 So, the weekend was fabulous all around!

Quote from How Will You Measure Your Life?:

“Experiment in life.  As you learn from each experience, adjust.  Then iterate quickly.”        -Clayton Christensen

Now, those Pumpkin Scones we made?  AMAZING.  This is the second time I have made the recipe and I know I will make it again and again!  Hands down!  In the past I have made it with a spiced glaze, but this time we passed on the glaze since we had already consumed a donut and milkshake, and they were still tasty!  And, yes, they do require a TABLESPOON of baking powder.  Just do it.  Don’t ask questions.

For the Spiced Glaze:

1. Preheat the oven to 425 degrees F. Line a baking sheet with parchment paper; set aside.

2. Combine flour, sugar, baking powder, salt, cinnamon, nutmeg, cloves and ginger in a large bowl. Use a fork to cut the butter into the dry ingredients until mixture is crumbly and no chunks of butter are obvious; set aside.

3. In a separate bowl, whisk together the pumpkin, half-and-half and egg. Fold wet ingredients into dry ingredients, and form the dough into a ball. Pat out dough onto a lightly floured surface and form it into a 1-inch thick rectangle about 3 times as long as wide. Use a large knife or a pizza cutter to slice the dough twice through the width, making three equal portions. Cut each of the portions in an X pattern (four pieces) so you end up with 12 triangular slices of dough. Place on prepared baking sheet. Bake for 14-16 minutes, or until light brown. Place on wire rack to cool.

5. To make the spiced glaze, while the powdered sugar glaze is firming, combine all of the ingredients for the spiced glaze. Drizzle over each scone and allow the icing to dry before serving (about an hour).

This entry was posted in Callie!, Envy, Food Picture (No Recipe), Races, Recipes. Bookmark the permalink.

4 Responses to A 5K with the Bestie on my DE Trip! (Recipe: Pumpkin Scones with Spiced Glaze)